skip to main | skip to sidebar

Trey is growing like a weed I tell you! Too fast! Of course I'm glad he's healthy (yes, that means tall and chubby for his age.) But on the other hand Trey stop growing up you're not even a baby anymore! He starting crawling at about 9 months. Now he is 11 months and is taking his first steps. He is so proud of himself and is adventurous for sure. Any day now he is going to be running from me all around the house. Yikes! Let me just list a few of his talents:
1. He can play basketball like a pro. Ok, for an 11 month old that is. He can dunk very well on his mini basketball hoop.
2. His favorite word his "Coco" my parentals dog. He gets so excited when he sees her and when we react to him saying her name.
3. Crawling. He has a special scooter crawl where he leaves his right leg hanging out to the side a lil bit if he's not in a hurry. If he is in a hurry then he can crawl in the correct form if he so chooses.
4. Walking? He's worked up to about 7 steps straight I'd say at this point. He gets so excited!
5. Clapping. He claps for himself when he does his tricks too of course.
6. He's learning to self feed. He's finally figured out that his fingers can in fact put food in his own mouth. Which is good, but also makes me nervous that he's going to find things to choke on.
7. The list could go on and on but his main talent is being ADORABLE. But of course that's coming from his mother goose. 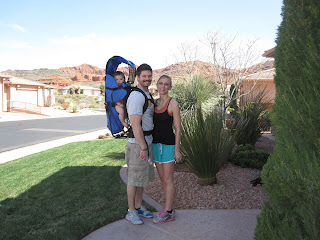 Last weekend we went to St. George and yes it was a lot of fun. We took Trey on a hike in the hiking backpack and he loved it. He loves being outside and seeking adventure of course. He also tried swimming for the first time. He clung to me for dear life at first, but slowly warmed up to it. Especially liked it when some random kids came into the pool and he could yell "AH!" at them ("AH" being his way of saying "Hey look at me!") He LOVES kids, especially his girl cousins that are a little older and can run around and do silly things that he can't yet.

I haven't blogged in a long time so I guess I should mention that we did have a lovely Halloween, Thanksgiving and  Christmas! Maybe next year Trey will be a little bit closer to as excited as I was for him to open his Christmas presents. 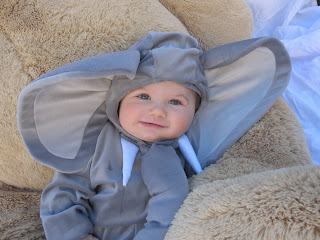 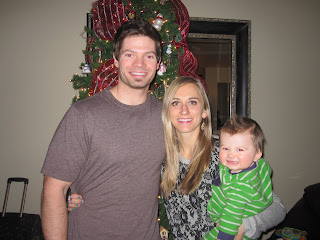 Well I guess that's all that's new with us. Oh wait one more minute detail. We're moving to Wilkes-Barre Pennsylvania in August, becuase Kade got into PA school! Sooo excited!! We shall be there for 2 years and while it may be lonely at times due to lack of family and friends it will be worth it! Wish me luck in making friends, because Kade is probably going to be at school or studying all day every day for the first year of it. Good thing I've got Trey to keep me company! 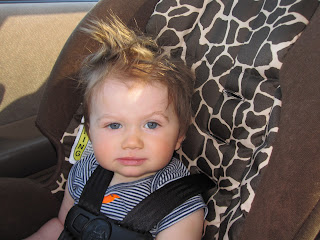